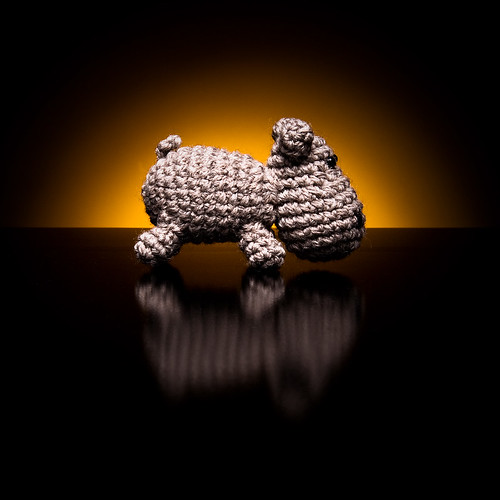 A while ago I photographed some Amigurumis in my photo studio for friends who likes to knit small stuffed toys. The result can be seen above and on Flickr if you click on the image.

Lighting small toys is one thing, but getting the light right for wool and threads is quite tricky, especially light colours. To get the structure visible but not blowing out the highlights takes some testing.

To get the structure in the knitting I setup a Profoto Softlight reflector with a grid as my main light. Mainly because of the relatively large size of the beauty dish, but also because that was the biggest light shaping tool I had at the moment that could be fitted with a grid. And the grid was useful in controlling the light into a beam that did not hit the background, only the toy.

Snoot and gel for background effect 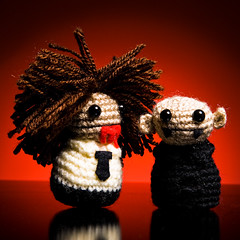 From this angle, without any light on the bakground, the object would have been a bit boring. So I used another flash placed under the table with a snoot to create a small coloured gradient on the background.

The size of the gradient light on the background (and the lightness) could be adjusted by moving the flash nearer or more far away from the background (at the same time giving different gradients with a hard or soft falloff). The background was a white paper, which made it easy to tint with a coloured gel on the flash/snoot. I think I used filter gels from Rosco or Lee? 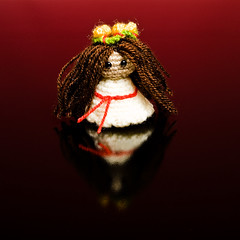 As the background was near the table I shoot the toys on, some of the background light spilled back and tinted the black glossy plate (from IKEA) they stood on.

When I shot from a low angle, the light on the background became a circular gradient that went from a clear colour in the middle to back on the edges. But moving the camera up a bit, the light from the background tinted the reflective surface more clearly and the gradient became a part of the “floor”.

The main part of the retouch was to enhance the contrast on the threads so they stood out even more against the background. Selective sharpening and a little masking on contrast layers took care of that.

If you want to see more of knitted toys, I recommend a visit here (my friends who did the knitting).

Next post: Table as a reflector – portrait lighting setup